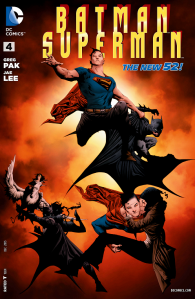 The Batman Superman pairs have to decide how to save their respective worlds in Batman Superman #4, a complicated and heavy issue with major ramifications for the New 52 storylines going forward.

Last issue, Kaiyo the Chaos Bringer introduced Darkseid, an incoming threat capable of destroying both Earth 1 and 2. The reveal by Kaiyo also comes with a challenge in the form of a riddle — one Earth will be destroyed and one saved, depending on the choices made.

The discovery of a powerful crystal held by the U.S. government prompted the superheroes to act, and issue #4 begins with a moment from the first pages of the first issue where Bruce Wayne and Clark Kent met in a park.

Though their methods, motivations, and personalities are very different, they’re essentially two sides of the same coin as evidenced by the similar conclusions they reach.

Back on Earth 2, Wonder Woman fights Kaiyo in hand-to-hand combat, while Lois Lane rides with Selina Kyle in a Batwing towards the secret base. The Batman and Superman pairs easily take out the military installation and secure the crystal before competing desires force another confrontation.

It’s an interesting battle with a complicated premise. While the Earth 2 heroes have basked in a future filled with optimistic change, victory has defeated them. Without any real threats, they’ve become complacent, over-confident, and rusty. Not wanting the weapon to fall into the wrong hands, the heroes of Earth 2 decide it’s best to destroy it, even though the crystal has the power to stop Darkseid in his tracks. That power, however, also represents a danger for the Earth 2 heroes who want to maintain the power structure — the one with the heroes on top.

The heroes of Earth 1 couldn’t differ more. Whether it’s pessimism or a realistic view on the state of things — Earth 1 Batman and Superman would rather keep the crystal if it means saving the planet. Proving youth isn’t wasted on the young by surprising their older counterparts and winning the duel, the youngsters come out on top, and Superman touches the crystal, imbuing him and his Batman with a tremendous power that makes what they dream into reality.

The turn of events becomes resolved with teamwork as the two sets of heroes accomplish their goals. The day is saved, but Kaiyo isn’t finished. Admitting the entire event was a ploy to see which Earth’s heroes were more powerful, Kaiyo gives the victories to Earth 1’s Batman and Superman. After she warns the heroes of Earth 2 that they’re doomed, Kaiyo claims Earth 1 as her new home and wipes everyone’s memories.

Back on Earth 1, Kent and Wayne meet once again in the park where a boy was bullied. The boy, having learned to fight for himself, strikes the bully, breaking his nose. Kent and Wayne talk about the fight before parting ways again, but the last panel hints the battle isn’t over for the boy and for the heroes whose relationship is beginning to build.

Writer Greg Pak has written a four-story arc filled with turmoil, complex psychology, and twisting contrasts that goes under the skin of two popular characters. There’s a level of intimacy that’s sub-conscious, and the way this story ends creates a jumping point that’s partially disturbing and wonderfully compelling because of what also comes before it.

With two sets of heroes choosing markedly different paths, who’s to really say which team got it it right when all’s said and done? The Earth 2 heroes have overseen an era of global peace, and they don’t mince words when accepting credit. To them, it’s a status quo worth maintaining, and anything that threatens to tip that balance can potentially create a shift in power that could push the scales in the opposite direction.

On the flipside, the heroes of Earth 1 see no reason to destroy something which could tip the balance in their favor. Batman of Earth 1, seeing the threat Superman could become, knows too well what chaos and unpredictability can do. Batman, ever prepared, knows weapons can protect as well as harm.

The last panel hints at a dubious victory. Earth 1 wins a stay of execution, but at what cost? With Kaiyo choosing to make this world her new home, the chance to beat Darkseid comes with a glitch that could cause trouble sometime in the future, near or far.

Regardless of what’s to come, the past four issues have been a real treat. Pak is a writer with grand ambitions. The amount of setup gives the first arc a dearth of potential drama and conflict, but the intricacy is handled well.

Jae Lee’s run as artist doesn’t even last the full length of this issue — Ben Oliver takes over for the last four pages — and he’ll be replaced in issue #5. Lee’s artwork may have distressed some, but looking back on the story arc as a whole, it fit the parameters and tone of the story, though it wasn’t always clear what was happening this issue. It’s hard enough telling the Supermen and Batmen apart, and when Earth 2’s Superman is hit with a blast from the crystal weapon, the action seems a little confusing as he’s shot upward into space for no apparent reason. Besides having to look a little harder to interpret what’s happening on page, the artwork still leaves an impression that showcases how chaotic things get when the World’s Finest from two worlds clash.

On colors, June Chung is joined by Daniel Brown, and pages glow with the high contrast yellows that fade into lush sky blues on other panels. Kaiyo’s red face, which would look out of place and cartoony under less-trained hands, looks natural and otherworldly. Superman’s costume with its strong blues and vivid reds gives him a regal look that befits his character.

Though Pak remains as writer, the next issue may be a jarring experience for some. Pak managed to juggle four character’s worth of inner monologues, and if the next issue seems a little “silent,” it’s because of the downscaling. With new art comes a change in perspective, and Brett Booth will be a pleasant change to some or a major shift for others. But as long as the dynamics are there, Batman and Superman will continue to be a compelling book. So far, the series has triumphed because of how well it examines the relationship between two titans. The result is a sum far greater than its parts, and readers wanting more out of their superhero books would be well served putting this on their pull list.

Buy Batman Superman #4 from Things From Another World!