Thrown into another world, Batman and Superman have their hands full fighting…themselves?

Batman comes face to face first with Catwoman, the wife of his counterpart, before he spars with the older and injured version of himself beaten by Superman.

Back in Kansas, Clark Kent meets his parents who are both alive and well. Both of the Supermen battle until Martha Kent bids them to cease. The wise woman senses the younger Superman has experienced incredible loss, and the young superhero is welcomed home.

The disorienting but enthralling back and forth follows two pairs of heroes on tours ’round this universe’s Earth. Gotham City has been cleaned up, and Arkham Asylum turned into an amusement park. Criminals have been put on ice — literally — thanks to a Supreme Court order that keeps the likes of the Joker, Creeper, Sinestro, and Aquawoman from troubling the general public.

Heading to Metropolis, young Clark sees how the partnership between the alternate Earth’s superheroes have changed the world. The grass seems to be much greener on this side as Kent sees the world, one leap at a time, before he touches down in the big city and meets his counterpart’s wife — Lois Lane. When Wonder Woman appears, things get even more complicated when it’s revealed that appearances can be deceiving.

Batman Superman #2 is a dense issue packed with twists and bends. Greg Pak has opted to put the pedal to the metal, and what is becoming established as Batman and Superman’s first meeting has morphed into a mind-bending view of a possible and optimistic future. But is this a world created by the Trickster, and is there something darker lurking beneath the surface of this bright world? It’s worth noting the women drive this issue’s plot, and all of them — Martha Kent, Selina Kyle, Lois Lane, and Wonder Woman — are light years ahead of the men in understanding what’s going.

And when it’s revealed that Lois Lane is the Trickster, could it be that some — if not all — of the other women aren’t who they seem to be?

Artist Jae Lee seems to be drawing more for Batman as the art style continues its gothic vibe. Hair and capes flow like liquid into points, and the art takes a one-dimensional approach with several panels of silhouettes and an emphasis on dark shadows. It’s very dreamy, which suits the subject matter, giving Pak’s story an air of mystery. While some may not be keen on Lee’s style, he does have a way of composing scenes for dramatic effect, and the action sequences are artistic in scope and graceful in movement.

Lee’s artwork also benefits greatly from June Chung, whose colors seem to have a pronounced effect. Whatever one thinks of Lee’s artwork, Chung’s colors add character to both plot and visuals, and while Chung has an empty canvas to work with for backgrounds, locales and scenes are visually distinctive because of his choice in subtle and smooth tones — Kansas in gold , the Batcave in a seagreen fog, and Metropolis covered by a romantic violet sky. In sketch form, Lee’s artwork would look very different without the added dimension and shades from Chung’s colors, and replacing Chung with another colorist could effectively reconfigure the book in several ways.

This issue is less Batman Superman as it is Batmen and Supermen. Bats and Supes appear together only on two pages in the entire issue, and it isn’t clear what’s going to happen when they meet again. For now, the contrasts are split through the characters we know as Batman and Superman. Each now has two components — old and new. The aged versions live in a more utopian world where their actions have changed lives. Knowing this, will the younger versions join forces or discover a critical flaw that forces them to fight the future? The addition of another Justice League member whose connection to Superman in the New 52 has been controversial may up the ante with more drama, more action, and more awesomeness.

Why should we expect any less? 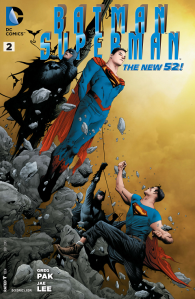 Buy Batman Superman #2 from Things From Another World!