The pages of All-New X-Men have seen some bitter and acrimonious debates waged between the X-Men and Avengers members who’ve been torn apart by last year’s AvX event.

Standing in the bullseye of those arguments, are two similar but very different representations of the same character — the past and future versions of Cyclops. The modern Cyclops has turned into a polarizing figure who’s found acceptance from the general public and a bitter disregard by once-loyal teammates he once fought alongside. It’s a bit of an ironic twist in which Cyclops has gained the world, but many in the mutant community have wondered whether he’s lost his soul. 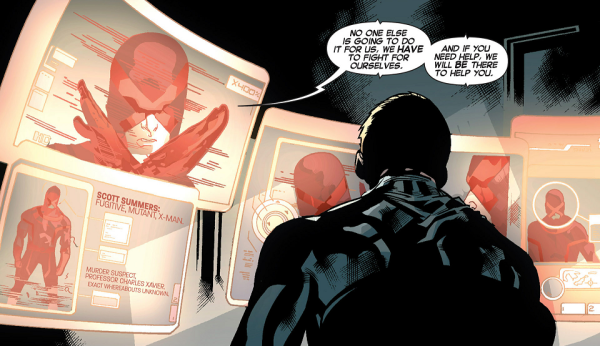 Not that everyone’s given up or sees it the way, say Wolverine, see it. There are some who believe modern-Cyclops is doing what he must to ensure the survival of his race, and the Avengers are hypocrites who’ve sheltered someone blamed for ridding the world of most of its mutants.

Teenage Cyclops may be history, but he’s also present in All-New X-Men thanks to Dr. Hank McCoy’s time-tampering. It’s become dramatically clear how vast the changes in Cyclops are, and the surrounding cast living in this universe have voice their opinions oftentimes sounding off similar arguments found in forums where commenters fight over whether Cyclops was right or terribly wrong.

Issue #11 ended as the Avengers forced the X-Men’s Blackbird down, and issue #12 puts yesterday’s X-Men face to face with the Uncanny Avengers led by Scott Summers’ brother, Alex, aka Havok. The reunited siblings happily reacquaint themselves, and Cyclops discovers his brother, lost to adoption, has since discovered his own powers, became an X-Man, and now leads an Avengers squad.

Jean Grey also discovers a few things, namely that the Scarlet Witch wiped out most of the world’s mutant population.

It’s a point that’s found traction in various forums discussing the Avengers’ hypocrisy: hunting down one mutant charged with murder while employing another charged with depowering 90% of the world’s mutant population. Jean’s strong reaction provokes a bit of action and dispute, but both sides part even after Captain America explains the reason for pulling the X-Men’s blackbird out of the sky: Mystique’s crime spree which has netted her millions of stolen dollars.

It’s a complex issue that further explores the complicated dynamics that are being filtered through the experiences of the younger X-Men members. Seeing Jean, Scott, Hank, and Bobby Drake coming to terms with the world as it is puts things into an interesting perspective via depth and distance. The classic X-Men represent purer versions of themselves, and their presence here in this modern title shows how far things have come. Cyclops has been branded a murder, Jean’s dead, Hank is blue and furry, Warren’s got amnesia and metal wings, and Bobby’s been identified as an omega-level mutant.

Brian Michael Bendis proves he knows these characters on an intimate level, and his deft writing touch brings in various arguments and points, letting them play out with pointed dialogue, flashes of physical violence, and character development rolling with momentum. 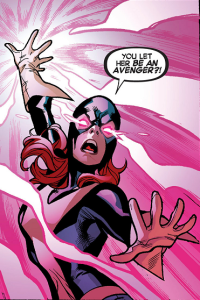 It’s especially touching when Havok and Cyclops share an emotional moment — the realization that Havok missed out on his brother’s younger years is personal and empathetic.

The issue ends with the original X-Men discussing the events of the day and the gray matters. For Cyclops, the future is complicated, and the question is posed: was Cyclops’ development into the man he is today an inevitability? Perhaps this present version was meant to be all along.

Bendis gives readers answers, but his weaving gives way to bigger and intriguing questions and thoughts.

Stuart Immonen’s pencils provide the visuals for the issue, and they’re a little more cartoony than usual with exaggerated facial expressions. It isn’t Immonen’s best work — details are fuzzy, facial profiles lack eyeballs, and Logan’s face looks like it’s melting — but it’s particularly strong in some panels, especially those depicting the love shared between the Summers brothers. Rain Beredo’s saturated colors give added detail and dimension, overlaying Wade Von Grawbadger’s inks. Whether it’s Immonen or Grawbadger who’s responsible for the heavy shadows — it looks like a few corners were cut when characters lose a lot of detail under heavy shadowing.

Overall, it’s an above average book. Bendis’ scripts are solid, and the visual team made up of Immonen, Grawbadger, and Beredo — gripes aside — deliver with artwork that’s easy to look at.

All-New X-Men treads interesting and fresh ground, even if the plot points and arguments can be found in forums and comment sections. It’s Bendis’ smooth storytelling and level plotting, free from a heavy hand, that drives the issue. The cinematic visuals display the drama, and this issue continues the solid streak from issue #1. At this point, we don’t know if the original Scott Summers will be the modern-Scott’s undoing.

It could very well be that McCoy’s hope of straightening out Cyclops only leads the young version of Scott Summers to transition into the man he is today, right here, right now.

Buy All-New X-Men #12 from Things From Another World!