Over the years, there have been plenty of Robins. Unfortunately, two out of the five have perished, but Jason Todd came back so that doesn’t really count. With Damian Wayne’s death still fresh, Bruce isn’t exactly firing on all cylinders as Batman and seems to be getting rather sloppy. Running on fumes, he’s dangerously close to biting off more than he can chew.

There is also a new character, Harper Row, possibly in the running for being a new Robin. Fans got the first look at Harper back in issue #1 of Batman and then a deeper look into who she is in issue #12. The current issue is the first where we really get to see her skills in action alongside the Dark Knight, for however brief a time it is. She ends up helping him at a time when he may need it more than ever.

Scott Snyder has done fabulously on the first half of his tale as well as with James Tynion IV on the second part. The two halves of this story make for a very compelling and palatable whole issue. The first half seems to be more of a story about dealing with and sharing the pain than it is regarding moving on and getting better in some way. It reminds me, in almost every way, of Death in The Family.

The second half of the issue deals more with the moving on and finding some way for Batman to anchor himself to sanity. It’s about finding a symbol to remind himself of why he has taken on his crusade and who helped him along the way. Both Snyder and Tynion have done a great job with the pacing and the whole story in this issue. The dialogue is great between Harper and Bruce, in and out of his cowl. The full issue is as much about Harper as it is about Bruce, which really makes it better.

The first half is pencilled by Andy Kubert and is just sensational. The lines are fantastic and I don’t see a single thing misshapen or out of place. The inks come from Sandra Hope, who has done some great work here. Then, there are the colors by Brad Anderson, which feel completely natural and very real-world. Now, I know I usually go into much more detail but there are two parts to this one.

The second chapter is penciled and inked by Alex Maleev in a very raw sort of way. The lines on that portion look far thicker and emotional than Kubert’s more deliberate and traditional style. While I can say it works for the issue, it took a few re-reads to get used to. Then, there are the muted sort of stylized colors from Nathan Fairbairn. Again, for the tone of the second half, it works well, but took some getting used to.

The issue was a 4/5 overall. I love the way they seem to be going here and making Batman a more emotional hero. Following the death of his son, it’s to be expected. There really are two stories going on side-by-side here. Whether you’re a fan of Harper Row or not, it’s still a great issue, but would have been better with a more uniform look. 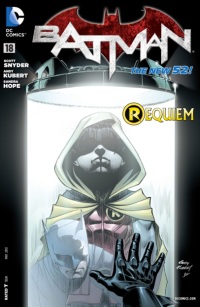 Buy Batman #18 from Things From Another World!