If you’ve followed this title, you’ll realize just how much is now going on for the men and women with the X-gene. So far, the current X-Men have been divided up between Cyclops’ wayward mutants on the run from the law and the Wolverine’s band of mutants at the new Jean Grey School. Oh, that reminds me, the original X-Men are back. Yeah, those guys in the blue and yellow uniforms. Beast went into the past and brought Scott, Jean, Bobby, Warren and that era’s Hank back to the future. Anyway, they’re here and this is where things get tricky, because of the whole time travel and blowing up the universe thing. Either way, this is a pretty good comic issue. There’s a lot that stands out and makes you realize just how much in their lives changes at this point. Personally, I’m just looking forward to ‘lil Scott taking on the present’s douche bag Scott.

Brian Michael Bendis has been hard at work over the last few issues bringing us all in for a fun-filled ride on the crazy train. There have already been a few twists in this story as Beast has a few health concerns to tend to. The dialogue is pretty good and not nearly as stiff as those older issues with the original team. Wolverine goes a little crazy in this issue, but that’s to be expected with the feral one. One of the great things about the issue is that all of the characters maintain their particular voice. He even gives both variations of Hank the classic Beast line of “Oh my stars and garters!” This man clearly knows his mutants. The pacing works for what’s going on the material is pretty good in general. 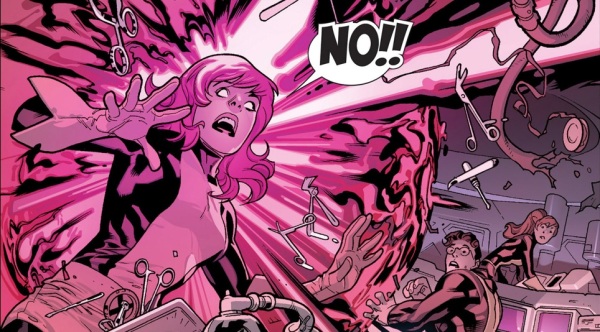 Stuart Immonen is great penciller and it certainly shows in every panel here. There’s a lot of detail in these pages and particularly the larger ones. The characters look more alive than they have in years and that’s saying something, for a team that has been in fans hearts for 50 years, come this September. The last time I was so enthralled by the look of the X-Men was during Jim Lee’s run in the early nineties. The look of this title is partly the result of Wade von Grawbadger’s involvement on inks, which results in heavy shadows. If you can’t tell, I’m quite partial to decent inking and the shadows that result in a better 2-d image. Von Grawbadger has done a great job on the inking so far. Marte Gracia has done a good job on the colors. The deep blues are just great, as are the brighter colors like the pinks and yellows. The art here is just great and seems to have gotten better with each issue.

This gets a 5/5 because I think it’ll be remembered for a while. Beast, both of him, may be the reason this is remembered several years (if not decades) down the road. I have faith in that. 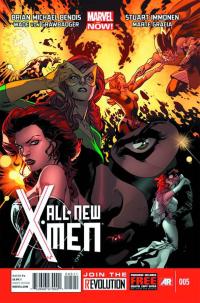 Buy All-New X-Men #5 from Things From Another World!