The spotlight on Avengers #5 falls on the newest Smasher, Isabel “Izzy” Dare, whose origin story begins with her finding an organic construct out in the fields of her family’s farm. A former astronomy student who gave up schooling to help out on the farm, Dare helps out where she can and bridges the gap between her father and grandfather who are at odds with each other over the ethics of caging animals. Grandpa Dare would rather see his granddaughter living up to her potential as a scientist, but she can’t stand to see her loved ones suffer due to her inaction.

Dare gets her chance to soar, literally, once she finds a pair of goggles that once belonged to a Shi’ar Smasher who failed to complete his mission. When worn, the goggles wrap Dare with the powers of the Smasher subguard class, giving her superhuman powers downloaded from the Shi’ar network. The origin story of the current Smasher sees her blasting off into a hidden stargate to the Shi’ar homeworld to become initiated and trained as the Shi’ar military’s newest human recruit. It’s where she learns about the various military hierarchies and the standards she’ll be held to — standards she’ll meet as one of Earth’s mightiest heroes.

The origin story is a flashback to the past as the issue shows what’s happening now — Smasher and the Avengers, embroiled in a fight somewhere in another galaxy, battle against an armada. Despite overwhelming odds, Smasher and her fellow Avengers fight hard and long enough to ensure victory for the Imperial Guard that comes in to finish off the fight.

Overall, issue #5 is perhaps the title’s weakest issue so far because of the appearance of a trend that may raise some concerns over originality.

Dare’s origin story as she goes from ordinary human to superhero seems derivative. It wasn’t too long ago that a famous character from the distinguished competition had his recent silver screen debut which told the story of how he received a foreign construct that granted him superhuman powers. After being whisked away into space, he’s flown to an alien world where he’s trained to become a space-soldier in a multi-planetary army.

Though the powers aren’t the same, there are far too many similarities between the Green Lantern and the new Smasher. Both received their alien tech from a dying or dead alien who previously held it, both hold prestigious positions and are the first humans to do so, and both are on a team made up of their planet’s mightiest heroes.

Add to these concerns issue #4’s introduction of the newest Hyperion, whose origin story resembles Superman’s, and Avengers #5 begins to feel less like Marvel’s elite squad and more like a wannabe version of DC’s Justice League.

Depending on how the readership reacts to the current title’s direction, Jonathan Hickman may get the plug pulled on his three-year plan for the Avengers, which so far, after such a compelling introduction, has become undermined with its focus on everyone but the original Avengers. The question of why Hickman would even go anywhere near to drawing comparisons between the Avengers and the Justice League boggles the mind, and without foresight into the Avengers’ direction into the future, issues #4 and #5 make the title feel like an upstart imitator with too much to prove and too little ground to stand upon.

The art of Adam Kubert, which is so hot and cold this issue, adds another dimension to the notion this boat has a few holes that need immediate plugging. Inconsistent art feels as if if two different artists took turns on the pages, and while Frank Martin’s colors work well and are a highlight this issue, for each great panel filled with detailed pencils and emotive expressions, there’s another with distorted facial features or flat generic characters.

Avengers, which was one of Marvel NOW!’s better titles, stumbles hard with issue #5, and while there are interesting tidbits — most of which center on the Shi’ar construct and its abilities to measure Smasher’s skill, grant her more powers, and keep her informed during battle — the  pacing of the story, the jarring back and forths, and the cliches don’t carry this book as much as they scatter it about.

When Dare — even her name seems contrived at this point — gets the command to put on the glasses, she does so with little hesitation, and as she gets taken into space, her reaction is far too unrealistic for someone getting shot into space. Avengers #5 feels too trite and small as if it’s another building block in Hickman’s Avengers extravaganza, which has taken a really steep dive. 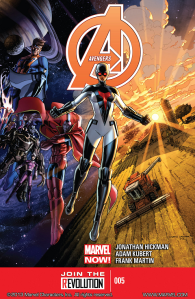 Buy Avengers #5 from Things From Another World!