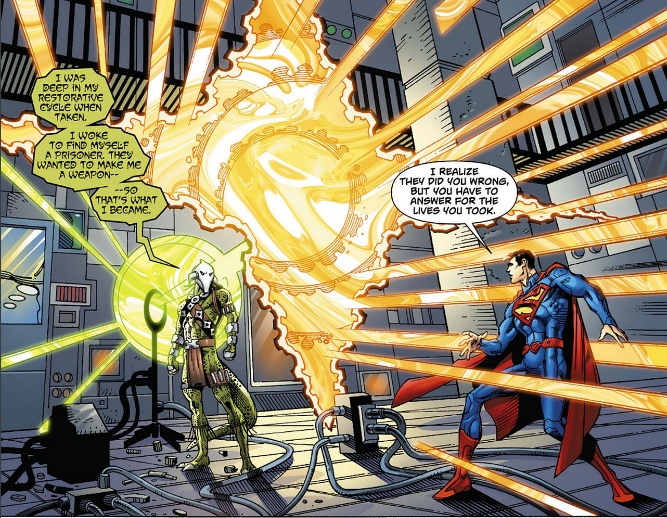 Last issue, Superman investigated a research facility in Russia where an inter-dimensional being had escaped, wiping out scientists and civilians. As Superman followed his target towards a nuclear reactor, the unknown assailant ambushed the Man of Steel defeating him swiftly and with very little resistance.

In Superman #12, Supes wakes up to find the stranger opening up a portal to its home dimension. Superman breaks free and attacks the being, knocking off the creature’s helmet in the process and closing the portal. The creature, now subdued, tries to use one of its cylindrical devices, which Superman picks up.

It just so happens that the device can also translate languages allowing the adversaries to communicate. Meanwhile, an air strike is ordered to wipe out both Superman and the inter-dimensional prisoner who goes on to explain he’s merely trying to escape Earth and return home.

Though the creature makes a reasonable argument for its violent reaction to being held prisoner on Earth, Superman fights to prevent it from leaving. The creature turns the tables on Superman, tries to bring Big Blue to its home turf, and asks Superman what he would do in the same situation. As a nuclear warhead descends on the reactor, Superman escapes the other dimension and the blast which destroys the reactor and buries its secrets.

Dan Jurgens’ art and writing have taken a turn for the worse here with a story held together by threads and art that doesn’t always hold up to scrutiny. Lucy’s face-shape changes from panel to panel, and Jurgens’ pencils are weakest outside of the action when facial expressions do most of the heavy lifting.

The main point of the story fails to gain traction because of weak plotting and writing which leaves much to be desired. The circumstances of the traveler’s arrival on Earth and his attempt at returning home don’t seem to add up. If the Russians picked up the traveler, who had crossed over to this dimension in a pod, did they betray the visitor by taking him captive. As well-armed as the traveler is, and the fact it finds this planet inhospitable –is the traveler an explorer or a hunter gathering information? Was it shipped to Earth because it had broken crimes on whatever planet or moon it had come from?

When Superman tries to hold it accountable for murder, his character takes a hit for several reasons,. This isn’t Action Comics Superman or even Justice League Superman — this is the oldest and more mature of the three, and for some reason, Superman’s reaction and argument expose how limited he is mentally. The problem isn’t with the question of whether killing is ever justifiable, but it’s how Superman approaches the conflict — with a blind perspective that dictates he should hold the visitor to a code that may be very foreign to an inter-dimensional being that explains it’s doing what it can to survive.

The moral dilemma creates contrast because Superman himself is an alien on Earth, but the circumstances are so very different. Clark Kent grew up in a well-adjusted home where he learned the value of life. After seeing how Superman reacts to the situations in issue #10 and 11,  it seems like he needs to mature a bit more. Last issue, he grossly underestimated an opponent, and it led to him being defeated without a punch landed. In this issue, he jumps to conclusions about the creature’s purpose and plans, and instead of showing discernment and sympathy, Superman resorts once again to using his fists to make things go the way he thinks they should.

In the end, Superman flies around Metropolis reflecting on what’s happened and comes to the conclusion he needs to stop focusing on himself as different. He takes up Lucy on that offer to go bungee jumping, and they head to the bridge. Clark’s decision to have a little more fun — in a bit of character development — doesn’t seem to come from any need to go in that direction. So far, Clark has been dealing with a taken Lois and Morgan Edge, owner of the Daily Planet, who might not be the most ethical man in broadcasting. The problem with Clark isn’t so much that he needs to be more fun — it’s that he needs to be more grownup about the circumstances. 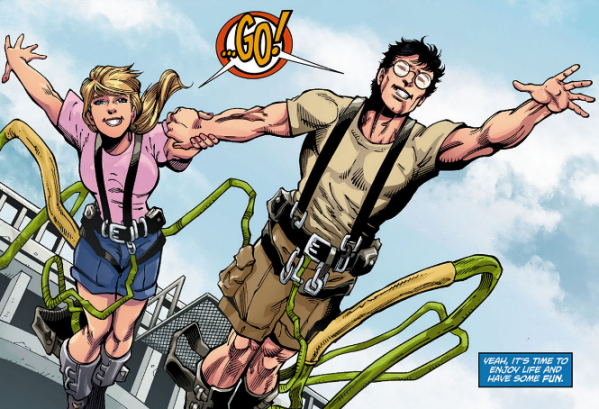 Superman needs bigger and better challenges that test a superhero in his prime. This storyline would have made more sense in a Superboy issue because youth and inexperience can lead a superhero to fight blindly for his ideals. Again, the problem isn’t that Superman has ideals and a code of ethics/morals to live by, it’s the approach, the execution, and the threading of story which are guided by Jurgens’ pen and plotting. Superman advocates truth, justice, and the American Way, but in issue #12, he comes across more as a zealot. Superman deserves more characterization than that.