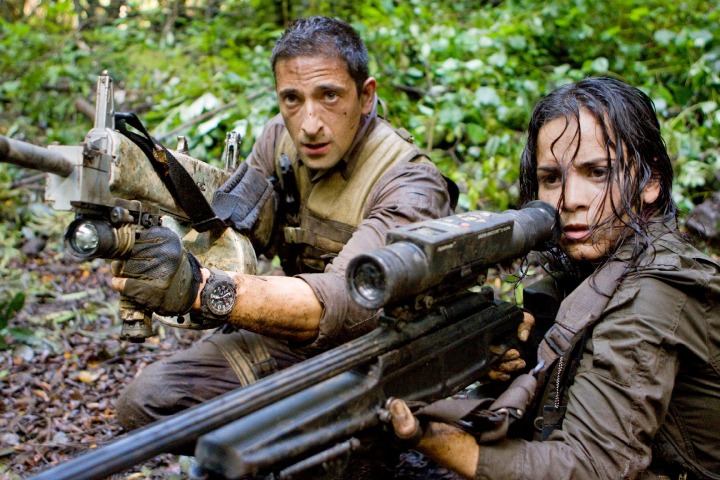 It’s been years since there’s been a direct sequel of some sort in the Predator universe. The Predators vs. Aliens movies took two foreign but genre-related franchises and mashed them together perhaps in the hope of giving a target audience a double dip of science fiction excitement. The Predator franchise in and of itself has spawned several movies and a good number of comic book series. Fans have been in want of a new movie for years and one has finally been delivered.

Adrian Brody (surprisingly well-casted) plays Royce, a mercenary waking up mid-skydive. After parachuting down to the jungle below, he finds he’s not alone — several others, armed and dangerous, have fallen into the jungle recalling last memories of flashes of light. A ragtag group held together by a common bond — they’re all violent killers in some shape or form — they must discover where they’ve landed, why they’re there in the first place and how they’ll survive the journey.As the group ventures forth, they realize they’re the game to a species of alien dedicated to the hunt.

The buildup is shaky — as characters are introduced and explored, the pacing feels rushed even as it drags. Character development, discovery, and building tension seem to struggle against each other for screen time. The result is muddy though it’s more solid than soupy. The process in which the characters come to realize they’re on an alien planet feels a little contrived but once the premise is accepted and the story moves from building its foundation to opening up for rent, Predators begins to fill. It doesn’t feel as if the writers were trying to dumb things down — it’s refreshing to see an action movie that doesn’t go over the top in order to hit the right spots. This might be a classic case of trying too hard. The back stories on some of the characters were intriguing enough that I wanted to know more about them. That the characters are developed enough to establish credibility and understanding is a strength — to remove them one by one off the screen just as we start to get to know them is an unfortunate circumstance that could have benefited from a more polished script and maybe a few minutes taken from the beginning and added to the movie’s end. It’s sincere and strong — a much needed step in the right direction for the franchise.